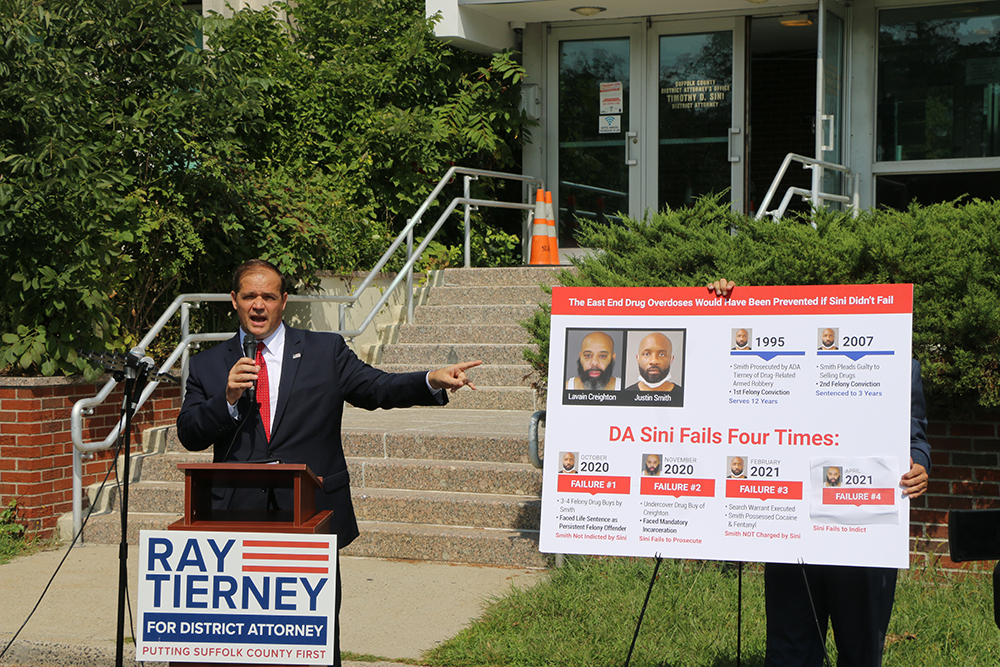 Ray Tierney held a press conference outside the Suffolk DA’s office in Hauppauge on September 8 to explain to reporters how the current DA, Tim Sini, had four opportunities to lock up Justin K. Smith and Lavain Creighton for felony drug charges, but failed to do so. He said Sini’s inaction led to six overdose deaths on the East End of Long Island.

At a press conference outside the District Attorney’s Hauppauge office, former Federal and Suffolk County prosecutor Tierney highlighted numerous times in the past year when Sini could have arrested, held, and indicted the two men, Justin Smith and Lavain Creighton, accused of selling the fentanyl-laced cocaine believed to have caused six deaths and injured twelve others.

“These two dangerous criminals should never have been on the streets of Suffolk County in the first place to sell their deadly poison. Tim Sini had at least FOUR opportunities in the past TEN months to put Smith and Creighton behind bars on felony charges and he failed to act!” said Tierney.

Tim Sini, who ran for District Attorney after a failed race for Suffolk County Legislator, has never tried a criminal case in Suffolk County Courts. Ray Tierney has been lead prosecutor on hundreds of major criminal cases in both Federal and Suffolk County criminal courts. Included in Tierney’s long record of successful prosecutions, ironically, was putting Justin Smith behind bars for twelve years for a 1996 drug sale.

“We need to ask District Attorney Tim Sini tough questions about his failures and why he did not indict Smith and Creighton when he had the chance. Is it too much to expect the District Attorney to do his job and protect the residents of Suffolk County?” added Tierney.

A video from Wednesday’s press conference can be found here: https://drive.google.com/file/d/1xVfbpFylNrWJJvb9zLJcmXqkQFltUqZq/view?usp=sharing