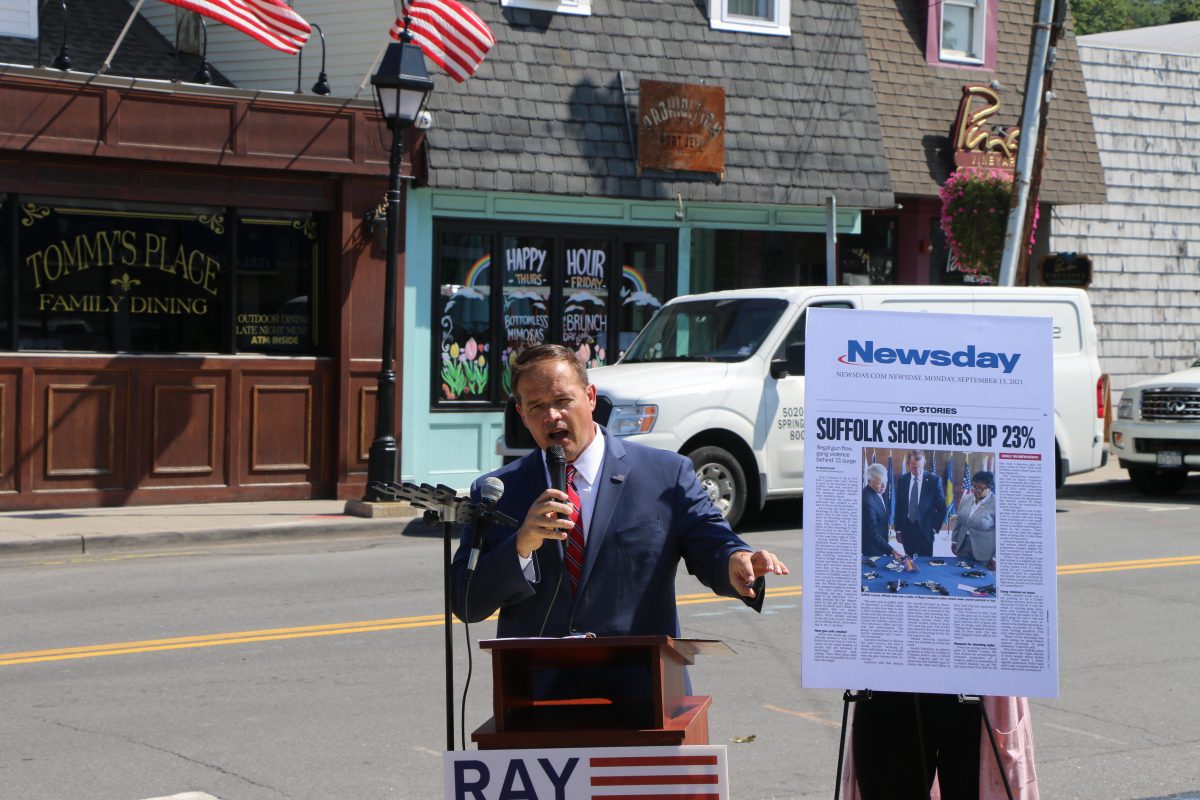 Ray Tierney stands alongside a poster of the Newsday article announcing a 23% rise in shootings in Suffolk County this year during a press conference that was held in front of Tommy’s Place in Port Jefferson Village — the site of a deadly gang-related shooting three months ago.

Newsday reported yesterday morning that there has been a 23% increase in shootings and a 50% rise in fatalities this summer in Suffolk County. The article highlights gang activity, illegal weapons, and fewer gun seizures as contributing factors. Ray Tierney explained that a lack of action from current District Attorney Sini is ultimately the most significant cause of the skyrocketing gun violence.

“This unacceptable increase in gun violence is happening because Tim Sini refuses to do his job as District Attorney and actually prosecute gun crimes! Sini failed to timely prosecute over 100 gun crimes just in April of this year in Suffolk County, leaving dangerous criminals on our streets. The vast majority of the violence committed in the county is being driven by gangs. Thus, you need a gang bureau and crime strategies bureau that will work hand-in-hand with law enforcement to identify, investigate, and prosecute these gang members in a timely manner. Timely prosecution means taking these violent actors off the street as quickly as possible. Right now, that is not happening, and the current District Attorney is not up to the task,” stated Tierney.

Tierney described Sini’s failure as being even worse than Bail Reform, which in and of itself has increased violence and chaos. Tierney’s message is clear — Suffolk County residents are no longer safe and this must change. He discussed how it is painful enough to think about this drastic increase in crime in Suffolk County in general, let alone to consider the effect of Sini’s incompetence on our most vulnerable communities.

“When I become DA in November, I will do what I have done for my entire career, which is work tirelessly with our local, state, and federal partners to keep our residents safe. This would be my job as District Attorney. This is what I would be elected to do. This is what Tim Sini was elected to do, and yet, he continuously refuses to put the safety of Suffolk County residents first. That will change in November,” added Tierney.

A video from Monday’s press conference can be found here: https://drive.google.com/file/d/1sAuYbG8IWuuvZ5hNpeDeD7rdSyF9Pp4l/view?usp=sharing